Task Resolution! What to handwave, and when to roll dice in your TTRPG

Last month I participated in "RPG Theory July" on Twitter. Each day, the TTRPG community had the chance to mull over some aspect of creating and playing RPGs.

One of the prompts for discussion was "Task Resolution," which is something that, it turns out, I have some pretty strong feelings about. I am surprised, in fact, to find that I'm able to articulate a coherent philosophy!

Caveat: Of course this won't appeal to everyone, it won't work at every table, and it won't fit all games.

But - if you are looking for a cinematic feel to your game, you want to skip over fiddly details, or you're just looking to use your time at the table as efficiently as possible, I think this'll be useful to you. Let's take a look!

This algorithm is going to help you decide:
What does this mean? I'm using Task Resolution to mean any situation where something is going to happen in your role-playing game, and the outcome is not certain. A character wants to shoot a monster, seduce a noble, or learn a difficult incantation. A monster wants to bite someone or run away. A thunderstorm produces lightning which might strike a character.

For purposes of this post I'm assuming that the game you're playing uses a randomizer to resolve uncertain task outcomes (most games use a dice roll; some use cards, or a Jenga tower, or something else). If your game resolves everything through player actions/discussion, or in general doesn't use a randomizer, then the end of the algorithm doesn't apply. You can still use the first few boxes to decide which things deserve narrative focus, though!

I'm using Narrative Focus to mean anything that you spend time talking about in the context of your story. So an out-of-character discussion about the rules, or a recap of previous events in the game, do not count as receiving narrative focus. Describing what your character does, or role-playing it, or bringing out props, or rolling dice to see what happens - all of these are narrative focus.

If it's not interesting, don't even spend time on it! But - what makes a task interesting?
If it's interesting, it deserves some narrative focus. And keeping the idea of challenges and themes in mind, we go on to the next decision!  We're going to spend time on it, in-game. Now the question is: do we resolve it via role-play? Or do we use the randomizing/decision-making mechanics?

If it's not hard to do, we don't have to have a conversation about how to resolve the task, right? If it's easy, you just... do it. For example:

Of course, "hard to do" is relative. You have to calibrate it to the setting, genre, and to what's going on in the game at that moment. Heck, you can calibrate it to the character themselves - if they have a lot of skill in a certain kind of task, they should be able to "just do" much more challenging things with it than an untrained person would. Some systems (like Gumshoe) build this in deliberately, where a character automatically succeeds in an action of baseline-level difficulty once they're trained up beyond a certain point.

But a lot of the difficulty is in the context. If the character is impaired, hassled, running low on resources, rushed, or opposed, something that would otherwise be a walk in the park can suddenly become difficult - and thus, something that needs to be resolved mechanically.

Please note: even if it's easy, it can still be worthy of narrative focus! The distinction - and decision - being made in step 2 is about whether we need to use a task-resolution mechanic to resolve it. If it's easy but interesting, resolve the task through role-play. Describe what the characters do and how they resolve their task. Enjoy the storytelling. Then move on to the next interesting thing worthy of narrative focus.

If the task is hard, it means the outcome is uncertain: the character might fail! If a task is risky, that means something bad happens if the character fails.  Like everything else, bad is relative to the context of the game and the scene.
If it's not risky, it may still be worth role-playing the outcome, but the player and GM can decide together whether the character succeeds or fails - and since we've stipulated in these cases that failure is not that interesting, the character should succeed most of the time, right?

If the task's outcome is uncertain and there are important consequences to failure, it's time to use a task resolution mechanic: roll dice, draw cards, whatever. Success means the character has accomplished something hard to do, in service of their goals. Failure means something bad has happened, and their goal slips farther away.

4. Bonus Question: Does the system support this style?

I noted above that this algorithm won't work perfectly with every game, and I want to highlight one particular game where that's the case. In Call of Cthulhu (7th and earlier editions), characters increase their skill by succeeding at skill rolls. Therefore, the players have an incentive to seek out opportunities to roll. It's then up to the Keeper (the GM) to provide opportunities to roll dice.

Does this mean that Call of Cthulhu games should be filled with a lot of meaningless dice rolls? No! But it does mean the Keeper - and scenario writers - need to hustle a little bit harder to make sure that the game is full of meaningful, risky tasks that fit the Investigators' skills. It's a challenge to be sure, but it's rewarding, and if the risks are high enough it really starts to make the Investigators sweat - and their players, too.

Want to see how this algorithm can help spice up combat in your games? My Electrum Best-Selling GM guide "The Good Fight" talks specifically about creating a variety of interesting and meaningful consequences in 7th Sea combat. Never again will you have an endless slog against an improbably tough villain! Instead, players will get to enjoy the feeling of total and overwhelming panic as everything goes to hell all around them. Enjoy!
at August 09, 2019
Email ThisBlogThis!Share to TwitterShare to FacebookShare to Pinterest
Labels: Applied Mechanics, GM Skills, Task resolution

Task Resolution! What to handwave, and when to roll dice in your TTRPG

Last month I participated in "RPG Theory July" on Twitter . Each day, the TTRPG community had the chance to mull over some aspect ... 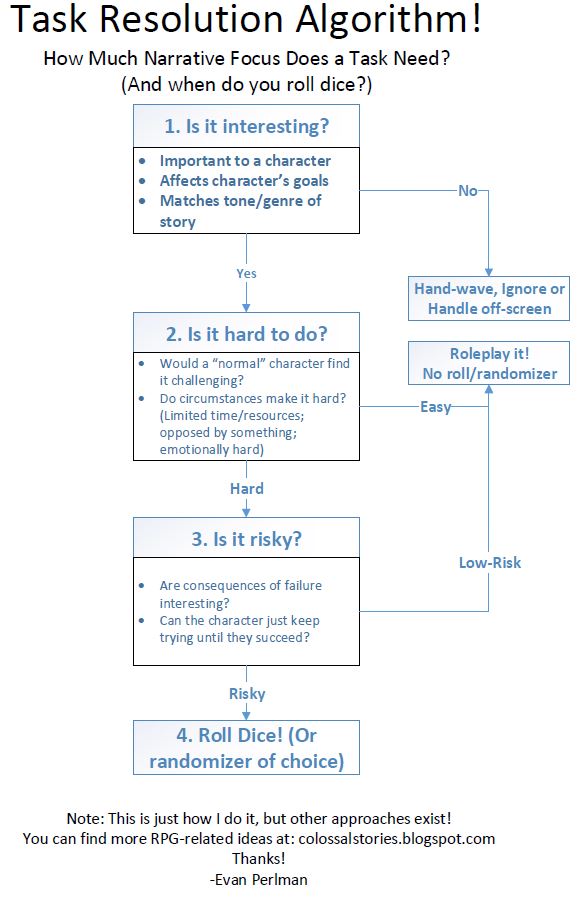