Mythos Magic is Not a Toy!

After suspending the game since, say, March, my Horror on the Orient Express group is finally back up and running, online. It doesn't feel as luxurious to run this campaign online (via Roll20) compared to sitting together at the table, but the benefit is we're much less likely to die of a hideous virus. So I think I'm OK with the trade.

Last night, the group reached Belgrade, and they learned a very important lesson about casting an untested spell...

So... in the "mini-prequel campaign" before we started Orient Express, I ran the group through a loose adaptation of Dead Light, Edge of Darkness and Dead Man Stomp. At the conclusion of that, they picked up a mythos tome from a would-be sorcerer. (Check out the "Zone Rouge" tag for a recap!)

The investigator who was most interested in magic decided to try to learn what spells he could find from the tome. I didn't want to give him anything huge and powerful so early in the campaign - especially because he was already holding on to the Dead Light box! -  so I gave him a disguised version of the Voorish Sign. I called it something like "A Cunninge Method for Obtaining Safe Passage From Thine Enemies." I told him nothing else about the spell or what it did.

This was, in real time, about 18 months ago.

Flash forward to last night. The investigators get to Belgrade, and have some extra time to explore the city before meeting their contact. They go to the bazaar, and - too good to be true! - spot something that might be the Right Arm of the Simulacrum. A burly, mustached Turk snatches it and starts running, and the investigators give chase. He leads them into a weird ambush down a crowded cul-de-sac, as six of his buddies step out of the crowd to fight the investigators.

...At which point the investigator with the spell says "I'm in trouble here. I'm going to cast that spell for protection." Remember that he picked this spell up a year and a half ago. By this point I had long forgotten what spell I *actually* gave him. So I went for something spectacular.

The spell summoned "the Lurker" from the attic of Edge of Darkness. With a wet, ripping, popping sound, a boiling cloud of faint turbulence and color appeared behind one of the menacing Turks. It grabbed him, dragged him backwards, and popped his spine out of his neck like someone de-veining a shrimp.

I was cackling with glee. I love this game.

at October 16, 2020
Email ThisBlogThis!Share to TwitterShare to FacebookShare to Pinterest

Aboard the whaler "Sovereign Elaine," somewhere in the Atabean In the middle watch, sky dark and clear, a boy sits high in the r... 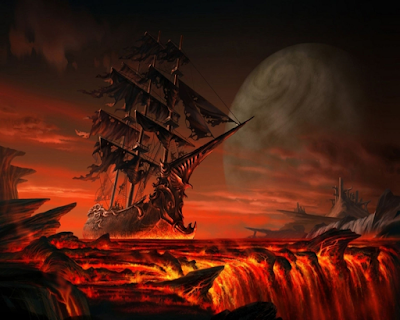